To stem the aggression from Germany, Italy and Japan, Britain and her Commonwealth put huge numbers of men into uniform in WWII. Her small but professional army was swallowed up defending a worldwide Empire and soon her forces were shattered and in full retreat, culminating in crushing reverses at Dunkirk and in Singapore. However, Britain stoically declined to surrender and her army was reforged, fighting back against the might of the Axis powers. The Tommies, as they were known, learned new techniques on the field of battles and by war’s end were a highly effective fighting force having fought from the opening of hostilities in 1939 to the war’s end in 1945.

Containing no less than 36 highly customizable plastic infantry, supplemented by weapons teams, transports and a Churchill tank (itself highly customizable as you can build any one of seven variants) this boxed set gives you a highly effective and balanced starting force for a British or Canadian army. 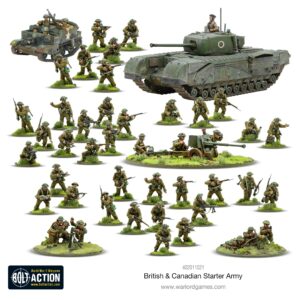